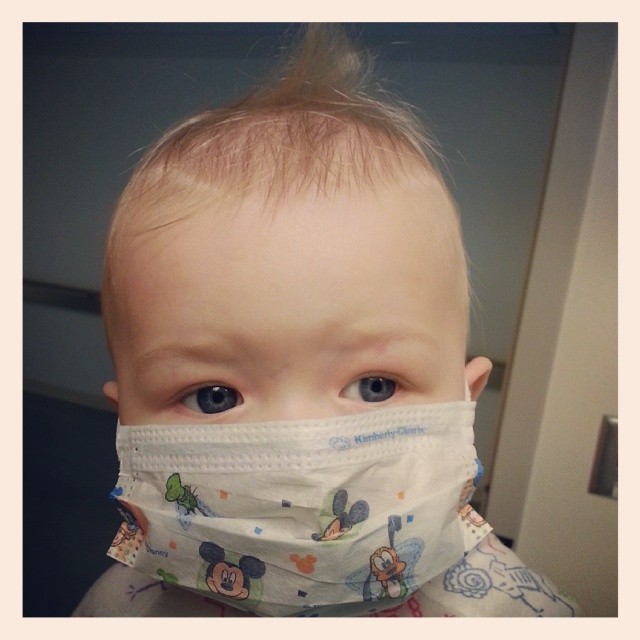 Mac finished his IV chemo treatments for this cycle! He had his IT chemo yesterday and it was a tiring day! He isn’t allowed to nurse for 4 hours before his spinal tap and IT chemo. The long story short is that they were running behind because of the snow and “Mac got bumped”. They ended up starting 2 hours later and Mac was losing it! Luckily it is a fairly short procedure and I get to be there when they put him to sleep and when he wakes up! There are still 2% blasts (cancer) in his spinal fluid so he will have more IT chemo, next Monday and Friday. His ANC was 6 today and they said it will be 1-2 weeks after ending treatment that his numbers will start to trend up. I think he gets to stop his eye drops and an oral med 48 hours after his last chemo treatment so that will be wonderful. Mac can shut his eyes sooo tight. He hates those eye drops!
Little baby has been pretty fussy the past 2 days. I’m sure there are a number of reasons for him to be uncomfortable or in pain. I do get a laugh when Jeremy hits the call button for the nurse and says “can you bring some oxy in here for my son?” 🙂 We watch Despicable Me in the wee hours of the morning if he can’t sleep 🙂 We requested some play mats for him that we tried today. He wants so badly to crawl but hasn’t quite done it yet! I will be excited when he is finally allowed to leave this room!
Mac’s legs are getting quite skinny. I guess its a good thing he had some to spare. Luckily he hasn’t lost anything in the cheek department!
I know it seems silly but I am waiting in sad anticipation of Mac’s hair falling out. I know its part of his treatment and I guess its visible proof that the chemo is working but my heart jumps when I think about it. I am so used to stroking his hair and making that little curl stand up on the top of his head, I guess I’m just scared for the time that I do that and hair falls out.
Well, Mac is where he needs to be and he’s on his way to getting better!
*today’s little miracle: he got to play on the mats unhooked from all the machines