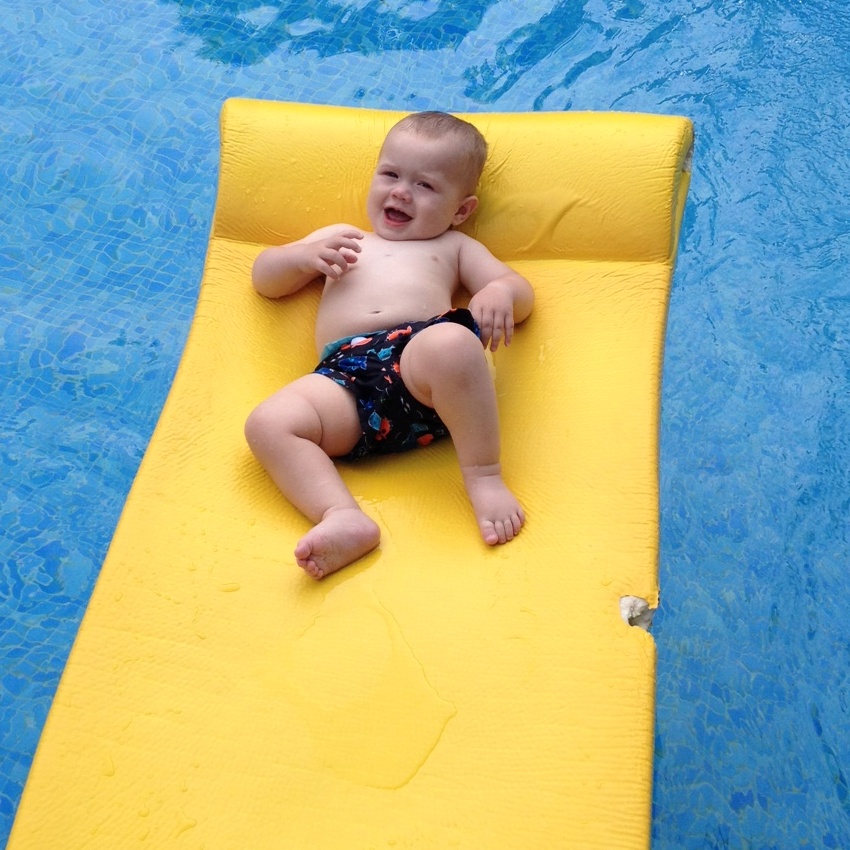 It’s been 4 months since Mac’s last bone marrow aspirate. We had a follow-up appointment today and it went great! Mac got his finger poked and they did an exam. He is still in remission and his numbers were good. His white blood cell count is still not in normal range but it is going up! We will continue to go for monthly appointments until he’s been off therapy for a year. Then it switches to every other month I think. This picture is from last month at the main campus! 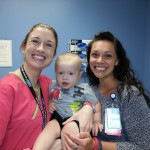 He is running around and loves to be outside. It’s crazy to me how much he understands. He knows some sign language like, more, please, and all done. He likes to do animal noises and he knows the fish says blub blub blub. When he wants goldfish for a snack that’s what he says. His new favorite movie is Monsters University. He can do “scary feet” just like to monsters do. It is sooo fun to hide and scare Mac. He LOVES it! haha I hate getting scared! He is slowly getting better at eating solid foods and is still nursing too. His favorite food is probably ice. He likes to play bubbles outside and throw balls around.

He loves being with other little kids! We went over to our friends house and their daughter Emma is a week younger than Mac. She leaned in to kiss Mac and he closed his eyes and kissed her back! It was too cute.

The last couple months have been a lot of fun. As you all know we LOVE the denver zoo! Every year they have “Dream Night” where nominated individuals get to bring their families to the zoo for this private event! There were only about 100 families there! Each family got to draw out of a hat which animal they would get to have an up-close encounter with. Jeremy drew the rhino! We got to go back where the trainers go and we touched the rhino! It was incredible. They served food and had a dance floor with a DJ. It brought tears to my eyes to see Mac out dancing. It was such an honor to go to this special event. When people look at Mac they have no idea what he’s been through. One thing I know for sure is that he brings so much happiness to those around him. There was a person in a frog costume playing with the kids and at first Mac didn’t want anything to do with him. By the end of the night he was crawling all over that frog and all sorts of strangers were asking to take his picture. 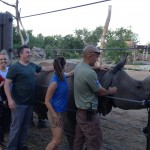 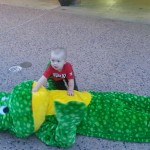 We knew that we would be going to Punta Cana this summer so we decided to get Mac into swimming lessons! When his broviac was in, his baths were only an inch or two deep and there wasn’t much playing in the water. We put him in the mommy, daddy, and me class at the therapy pool at The Ridge. It was Monday-Friday for 2 weeks. It was so much fun! He was the youngest one in the class. Now he can hold on to the edge all by himself, kick his legs in the water and he tries to blow bubbles but usually just drinks the water. 🙂 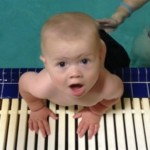 Our next adventure was camping! I was trying really hard to come up with a good Father’s Day gift for Jeremy. He had been talking about how he wishes we went to the mountains more so I thought camping would be perfect. I myself had never been camping in a tent before. (that was the first problem. don’t let the lady with no camping experience plan the trip!) I did some google research and found a campground, then we went to Dicks to get the gear. The next morning I made some tin foil dinners. (again, no experience here!) We got there and it was a little less than a mile hike into the campground. That was rough!!! We had so much stuff and had to make multiple multiple trips back and forth! We got the tent up and a fire going and cooked our dinners. They were GROSS! I was left to eat an entire bag of chips 🙂 For a good hour and half we were like, this is awesome! It was quiet and Mac was enjoying the outdoors. When it got dark we decided to try to go to sleep. Mac actually went to sleep pretty quick. He slept from 9:30-11:30 and then he woke up screaming! I don’t know if he just knew he wasn’t at home or if he was freezing but he would NOT stop. We tried everything. We finally decided to peace out. So being almost a mile away from our car in the middle of the dark night, we decided to take a road back to our car that said no trespassing. At least if we had to walk a long way, we were going to take a wide road and not the hike. We climbed over a fence and passed a house that we assumed was the rangers house and eventually made it to the car. The car was dead. It wouldn’t turn on at all! Dumbfounded, we decided that Jeremy was going to have to go back to that house and ask for help and Mac and I would stay in the cold car. Well needless to say, a ranger doesn’t live there. But despite the homeowner being drunk and using some choice words, he came to jump the car. It wouldn’t jump. The battery terminals were corroded. Perfect. They tried and tried for at least 20 minutes to start the car. We had no cell service so calling someone was out of the question. They desperately scrubbed off some of the corrosion and tried one last time. It turned on! Well now Jeremy had to go back and get the rest of our stuff from the campground! The end of the story is that we drove home with our lights blinking out and the car died right as we parked it outside our house! It was a miracle we made it! I told Jer we could keep the tent but only for living room camping. 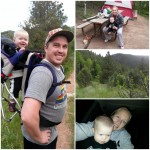 Next was our trip to Kansas! Jeremy was at a business convention in San Jose and my cousin was getting married in Kansas so just Mac and I went. It was more difficult getting through the airport and riding on the airplane without Jeremy but luckily Mac did pretty good! My mom and two sisters, BrookeAnnna and Meredith, picked us up from the airport and we headed straight to my grandparents house! They had never met Mac before but they were such strong supporters of us when he was in the hospital. We of course had to get a picture by the mailbox with my grandpa because that is a 20+ year tradition! We had so much fun with my family swimming and going on bike rides! Mac loved their cats! Meredith was sweet to let us sleep in her room and let us rearrange all the furniture so Mac wouldn’t roll out of the bed! On Friday morning I woke up early to go to weight lifting with Meredith. It was so fun. Now I can’t wait to get her here to do crossfit with me! We ate lots of Haliscos (yummy mexican food) and even get shaved ice. The wedding was beautiful and it was just really neat for all of our extended family to met Mac. When we were in the hospital we felt a silent strength. Now that we’re out and I get to see friends, family and strangers that tell me they were praying for Mac and thinking about us, I know all those people made up that strength. I am blessed to see and meet these people all the time. 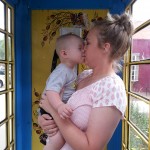 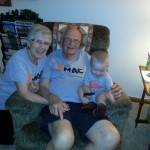 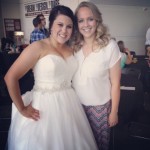 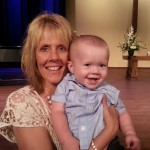 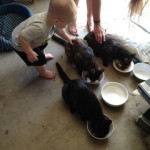 The next weekend we got to go to another wedding in Longmont! This was a my cousin, Carrie, on Marci’s side of the family. I love summer weddings and I love getting to see so much family! Ya know what else really gets me? Seeing people wearing Team Mac wristbands. We were hanging out at Carrie’s wedding and I noticed Mollie’s boyfriend Brandon was wearing his! I snapped a picture and held back my tears. 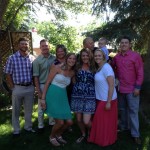 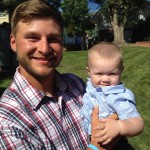 The next morning we left for the airport at 4am! We were so grateful our friend Rebecca woke up that early to take us! Remember that facebook contest for the trip to Punta Cana? Well we won and went this month! It was INCREDIBLE! The flight was a little under 6 hours and it felt long. We took a van to our resort and that was a 40 minute drive. The resort was beautiful. They had the longest pool I’ve ever seen! Maybe the length of a few football fields! There were yellow mats that had to stay in the pool that Mac liked to sit on. They were a hot commodity during the day so we would always swim from 4-6 when it was easier to get a mat and the pool wasn’t so busy. We all shared the king size bed and slept in in the morning. I was always the first one up eagerly awaiting the day! We would put on our sunscreen and head to the breakfast buffet. We ate omelets and fruit and they even had a juice/smoothie bar and she would make it fresh with whatever you wanted in it! Then we would head to the pool or the beach. Mac wasn’t a huge fan of the sand or the ocean but we tried! He’s so funny about not wanting to step in grass or sand. We built a few moats and castles and walked the beach too. They had 5 different dinner restaurants and 24 hour room service! It was paradise! Everyday we were just in awe that we got to go on such a special trip just the 3 of us. Mac couldn’t do make a wish because they have to be over 2 years old, but this was like our make a wish. 🙂 I just wanted to tell everyone there what a fighter he was. Unfortunately, my son having cancer doesn’t come up in a lot of conversations. One night I wore my Team Mac shirt and this guy came up to me and was like, I saw your shirt and I just had to show you this picture. He fumbles with his phone and finds a picture of his dog and says this is my Mac! I held up Mac’s hand and said, this is my Mac! And he says, that’s what I figured. I smiled but I was so dumbfounded that this guy saw me and my 16 month old son who obviously survived cancer and instead of mentioning anything about that, he just keeps talking about his dog!? So we were there for the 4th of July and they had a party and fireworks on the beach! They built the bar out of blocks of ice and not more than 30 minutes into the night, it was collapsing on people and then it completely melted! 🙂 Being with Mac was like being with a celebrity. The people that worked there were lovely and they would take Mac right out of my arms and hold him. They would give him high fives and kisses and ask to see his muscles! It was the best week ever. I’m so proud of Mac and all he’s been through. I’m really proud of us too. 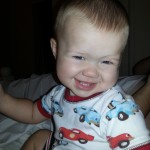 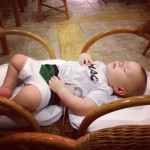 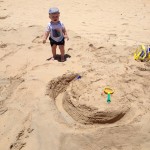 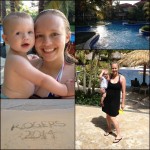 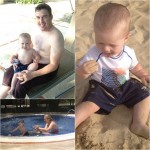 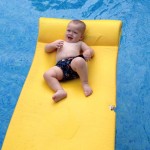