Let me catch you up and fill you in 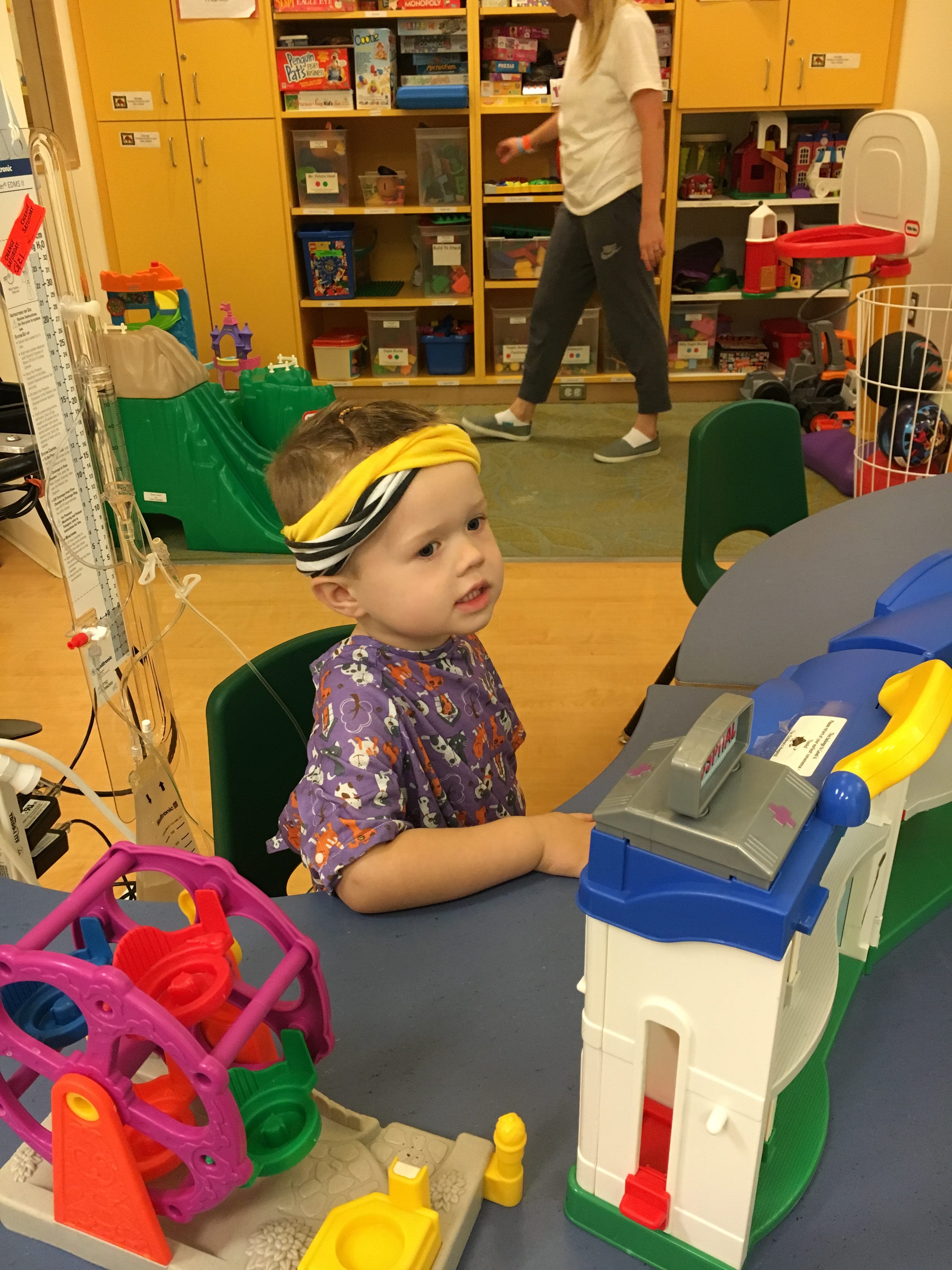 I’m feeling overwhelmed as days go by that I haven’t taken time to officially write down what’s in my head. I don’t know why but my mind feels very full and overwhelmed. Maybe it’s because all of this happened on “vacation”, far from home. Maybe it’s because we’re now a family of 4. Maybe it’s because brain tumors were NEVER on my radar. Maybe it’s because it’s so hard to see him sort of functioning like normal. No matter what it is, I know I’m grateful for my faith and Team Mac. That’s what’s getting me through. I’m really relying on that. I feel very up and down. I don’t think it’s a coincidence that I sit down to write this and the song, “He walked a mile in your shoes” came up on shuffle. It starts off with a narration that says,
Peace be unto thy soul, thine adversity and thine afflictions shall be but a small moment… know thou my son, that all these things shall give thee experience and shall be for thy good.
Our favorite nurse came to visit us the other day, and told us how peaceful, bright, calm and happy our room was. It meant a lot to us to hear that and our biggest hope is that Mac feels that too. 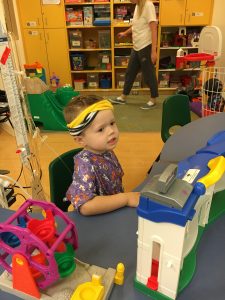 How we got to Children’s
So I’ll back track for you. The first Thursday in May all four of us flew to Kansas to celebrate my sister’s high school graduation. Friday afternoon, Mac told me that he was tired. I just about fell over. 🙂 This kid loves to fight his sleep. That night at dinner, he fell asleep in Jeremy’s arms. That night is when he started throwing up. He threw up all night and all through Saturday. He was SO lethargic. All he wanted to do was lay down. We had no idea what was wrong but thought it could be, food poisoning, the flu, or a stomach virus. I was in touch with his pediatricians office and they said only to worry about it if he got dehydrated. By Sunday, he wasn’t getting better and we knew he needed to get in. We took him to an ER in Salina Kansas. It was not a good experience. They did pretty much every test except a CT or MRI which would have properly diagnosed him. They concluded it was a virus and that all he needed was fluids overnight. However, they didn’t feel comfortable treating him due to his medical history. They put us in an ambulance to a larger hospital in Wichita Kansas. He stayed there until Tuesday. Everything about it was strange. We kept asking, don’t you think it’s strange that he has a “viscous virus” and yet none of us have it? We kept thinking, why is he so tired? Why isn’t he getting better? By Wednesday night we were really worried. Mac wasn’t being Mac. He was confused. He was asking for us to put on his shoes but they were already on. He was asking for covers out on our walk in 85* weather. We knew we couldn’t wait for our Friday flight (which we changed 3 different times) and we knew we couldn’t stay in Kansas. We got to the nearest hospital we knew of that could treat Mac. We went to the ER at Children’s in Aurora Friday morning.

Since being here at Children’s
So Thursday night before we brought Mac here on Friday, we are just racking our brains. What is going on? Jeremy are up talking about Mac’s symptoms and we think we’re onto something. It’s neurological. There’s something about Mac that isn’t all there. When I look into his eyes, he’s just not all there. It’s almost like his eyes look right past me. Are we the only ones that can see it? Or does everyone else see it too? It’s very difficult to describe even to the doctors. Well the only “brain” thing we can think of is, maybe he’s had a concussion. That’s what we told them we thought anyways. It was a lot of waiting around in that ER. They did decide that an MRI on his brain would be something to do. I don’t even think they thought they were going to find something. They were talking to us about, maybe he has swelling around his brain from the “virus” he had and that it would just take a little time to go away. Nonetheless, we did the MRI. It required propofol but we’re no stranger to that so off Mac went, and we went to the waiting room.
We were just sitting in that waiting room. Usually they just walk up to you and say ok he’s waking up let’s go! Not this time. Instead, we were approached by a doctor identifying himself with oncology. He awkwardly asked for us to go to a private room. He said that the MRI was still in process but that they found 2 masses in Mac’s brain. He didn’t have many answers for us but wanted to keep us informed. Oh my heart was beating so fast. Half way through him talking, I just burst into tears. I was shocked and heartbroken. We cried. We cried a lot. Then we waited forever before the next person came, who also didn’t have many answers. We didn’t even know what to do. I think we both felt like throwing up. We didn’t know who to call, or what to say. This was so unexpected and unbelievable. Mac has brain tumors? What does that even mean?
So after a while we got to go see him in recovery. He was happy and chatting with his sweet nurse. She was feeding him crackers. I bet he ate 25 saltines. 🙂
The plan was to take him to the intensive care unit, watch him overnight and do brain surgery in the morning. They needed to place a drain so that his spinal fluid could get flowing. One of the tumors is occluding the proper flow of spinal fluid. They also needed to biopsy one of the tumors so we could see what we are dealing with. They figured they better do a bone marrow biopsy at the same time. They were all fairly certain that this had to be related to his AML. It wouldn’t be a relapse of what he had before, but maybe the masses were leukemia that had been hiding in his brain. We signed a consent to place a broviac during surgery if the preliminary biopsy they do right there during surgery, looked like leukemia. It was supposed to be a 4 hour surgery. When I heard he would be done at 2:35pm I knew something didn’t go as they expected. He was done an hour early. They didn’t place the broviac. The preliminary results didn’t look like leukemia. They looked like a solid brain tumor. Those originate from the brain and not from somewhere else in the body like they would if it were leukemia. Unfortunately since then, we don’t know much more. The doctors are puzzled. I’ve heard the words rare and unusual so many times. Sometimes, chemo can cause other cancers, or sometimes, cancers can be related. AML and brain tumors aren’t those. One of our favorite doctors told us that she wished she could tell us of other cases like this but she couldn’t think of any. If it is leukemia, it’s also confusing. His bone marrow came back clean. We looked at the MRI with a doctor a few days ago and it was surprisingly difficult to look at. It’s so weird to talk about something you can’t see or really visualize. The large tumor is right in the middle of his brain. They won’t be able to take that one out with surgery. I think it’s about the size of a golf ball. The smaller tumor is a little more superficial and is the size of a larger marble.

The long story short is that they don’t know. We are hoping they have answers for us on Friday. In the mean time we wait and try not to go crazy. Mac is doing better with the drain and I think he feels better than he did a week ago. He’s been tired since surgery but today we went to physical therapy and played with some toys. He loved it. He’s able to walk in small amounts although his balance is unstable. You may have noticed from pictures that the left side of his body especially his face, is weak. They say that part of they large tumor is pressing on something, causing that droop.

It’s a really weird balance of trying to enjoy the innocence of not knowing and being anxious to have answers. I’m terrified. I’ve heard things about brain tumors I wish I never heard. The beginning is tough. The unknown is unsettling. I just want to enjoy every single moment of him. I want to remember all the ways he does things.

One night in the PICU I was just gazing at Mac while he slept and I knew that he knew he would face this trial just like he knew he’d face and beat AML. I quietly smiled to myself and rolled my eyes. Mac’s so tough. He’s so sweet. He’s so strong. He reminds me to have an eternal perspective. I was telling my sweet friend about this and it being the personal revelation I’ve received. That’s when she told me, hey, you knew you’d face this trial too. I’d never thought about it that way. It strengthened my testimony. Sometimes especially lately I question my strength. I think about how difficult treatment is and what a roller coaster ride we’ve just begun.

I need every single person on Team Mac. I’m leaning on your words of encouragement. Your texts that keep my focused on what’s important. I feel your love and am so humbled by the financial support you’ve shown. Once we know what we’re facing, we’re making new shirts. I’ve never taken off my Team Mac wristband. I never wanted this to be the reason but it makes me feel that much more ready to face this. Thank you for joining us. Pray for Mac and for our family.