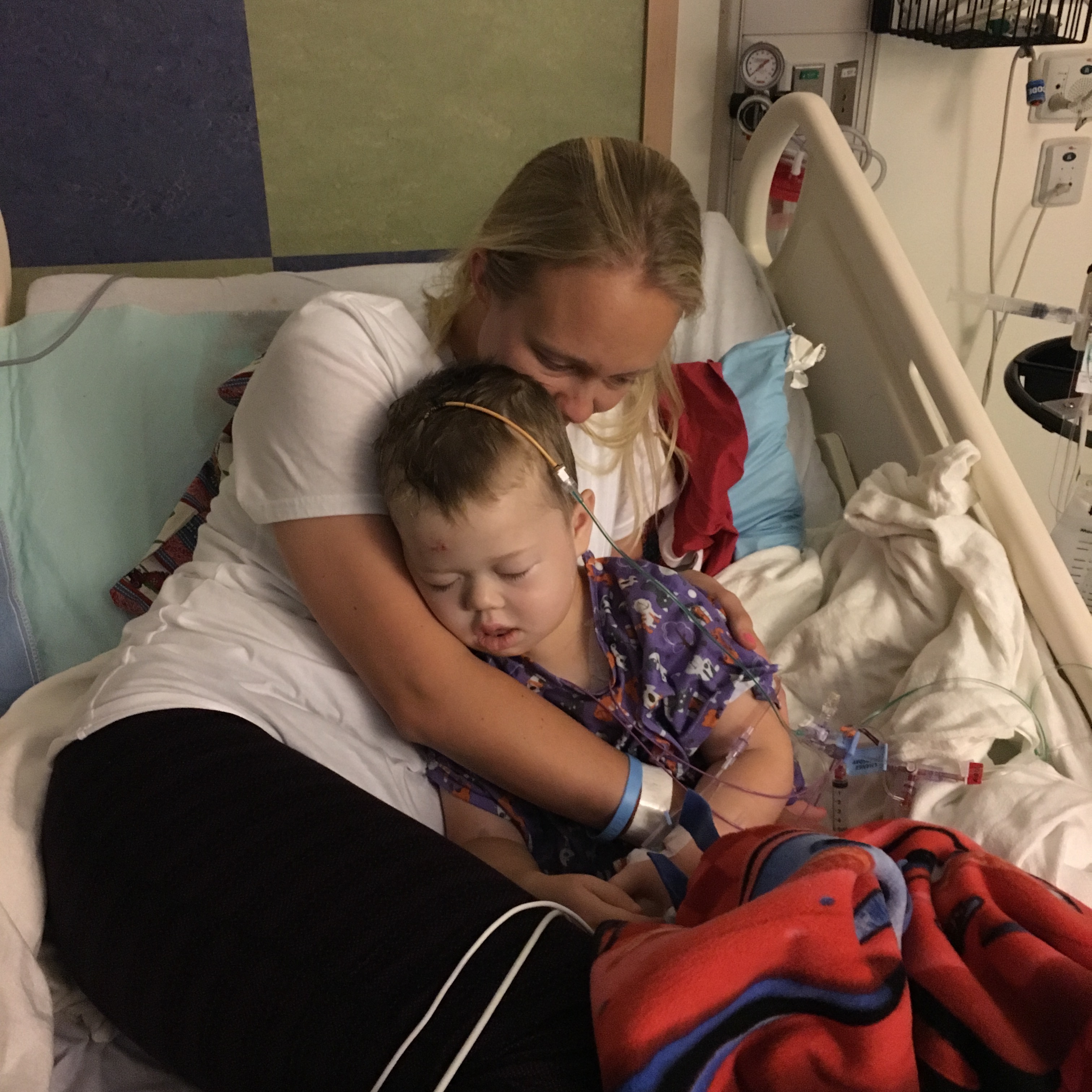 It’s been such a long 48 hours. To say I’m exhausted is a major understatement. Yesterday was grueling. There are strict rules about eating and drinking before anesthesia. So yesterday when Mac woke up at 6:30am he wasn’t allowed to eat or drink. He was begging for all sorts of food and drinks. We tried to get him out of the room to distract him but that was to no avail. I imagined this sort of peaceful morning enjoying our time together before massive brain surgery. It was no such thing. Amongst Mac’s begging for food, they needed to draw blood. Of course his IV wouldn’t draw so they were looking for a vein in his arm or wrist. Keep in mind Mac has 1-4 bruises in each arm crease, on each wrist and on both feet. He is beat up. The long story short is that for the second day in a row, they drew blood from his fingers and needed multiple tubes full of blood. The first day, he poured blood everywhere and the lady panicked and yesterday it came so slow, drip by screaming drip. I was practically sitting on him and it took me and Jeremy and 2 lab techs to get the blood. So that was our time before surgery. Of course I’m preparing for the worst in my mind thinking oh great. This is how I’m going to spend this precious time with Mac before he’s potentially never the same. Then it was time to take him down to the OR. 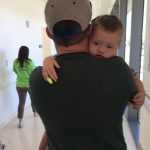 He didn’t necessarily know WHAT was coming, just that SOMETHING was coming. I’m sure we don’t give 3 year olds enough credit as to how much they are aware of. I offered to ride in his bed with him and he insisted on Jeremy holding him. He continued to refuse me even in the pre-op area which was terrible for my mom ego that was crumbling inside. We made it down there and it was kind of a zoo. Lots of people buzzing around. I answered some questions and talked to a few nurses. Then Dr O’Neill came around the corner. I was so relieved to see him. It was calming. I felt good about knowing he would be in there running the show with Mac. Originally the surgery was just to include the large tumor. By yesterday morning, they added a lumbar puncture to check to make sure there weren’t tumor cells in it, and they placed a port. I’ve heard it called a mediport and a powerport. Last time Mac had a broviac, so a port is new to us. Essentially, they now have good access and don’t have to worry so much about IVs in his feet. They also placed it in anticipation of chemotherapy. So anyways back to the pre-op area. We signed consent for all the treatment and gowned up. Caps, body suits and booties and walked him back to the OR. It was really a pretty big room with so much technical equipment. Right when we walked in I saw 4 large screens on the wall each of which had a different view of Mac’s brain. The tumor looked big. I wanted to stand there and gawk but time went so fast. We layed him on the table, both got right up in his face and gave him our kisses and we left. We both cried as we walked out full of anticipation, hope, fear, and anxiety.
They gave us a call every hour or hour and a half to give us updates. My heart raced every time. First they called to say that the port was in. Then that the LP was done and the brain surgery had started. After that it was, first we are at the tumor then every hour after that, they just said, he’s stable and they’re still working on the tumor. It was a LONG day. That 6-8 hour surgery ended up being almost 12. The last 3 hours were the worst with only one update. I had made myself completely panicked by the end. There was this board with kids’ surgery numbers and at the beginning of the day it had 30-40 numbers on it. By Mac’s 10th hour, he was the only one left in surgery. 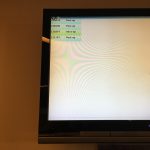 Finally Dr O’Neill came out to talk to us. We were upstairs and scurried ourselves down to the 2nd floor. He’s a hard read. Jeremy saw him and was terrified of what he was going to say. We sat down and he told us that it went really well. He felt like he was able to get the majority of the tumor. Mac did have some oozing so they gave him a blood transfusion towards the end of surgery. He kept talking and I was just waiting for the but. But it never came! We asked what the tumor looked like and his words were, purple, globular and “like a clump of rice”! Man I wish I could have seen it for myself! He said Mac had already spoke 2 words: No and Stop! 🙂 yup Mac’s awake!
We came back to see him and I just wanted to hold him. He was and is so puffy in the face. He’s in pain but they are trying to manage it. The other great news was that so far, we haven’t noticed any new deficits. His left side is still weaker than his right. He hasn’t really sat up or walked at all but he seems just as he was before. I am so impressed; with him and with Dr. O’Neill.
Today he went under anesthesia again for another brain MRI and a CT of his torso. The MRI was to see his tumor and brain post surgery and the CT was to check for any other tumors or lesions. 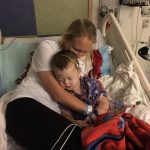 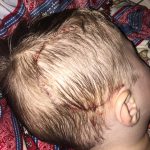 It’s going to be a long road. I have no idea how long this will take to try to treat. Months? Years? But this was a great first step. They still don’t have a diagnosis and it’s a really fluid situation. Lots of speculation as to what we are dealing with, but not enough facts yet. They say that they aren’t sure the smaller tumor is the same thing as the big tumor. My guess is that they go in and try to take it out and then biopsy it as well. Another big part of today was meeting with the genetic counselor. She explained how rare childhood cancer is and how rare it is to have two unrelated childhood cancers at age 3. There may or may not be a genetic explanation but they want to explore it.
I feel great knowing that surgery on the large tumor is over. I also feel tired when I think about all that is to come. I know I say this all the time but we feel so blessed. It’s an incredible feeling knowing that so many wonderful people care, love and pray for Mac and our family. Thank you for your love and support.