Finally a chance to write 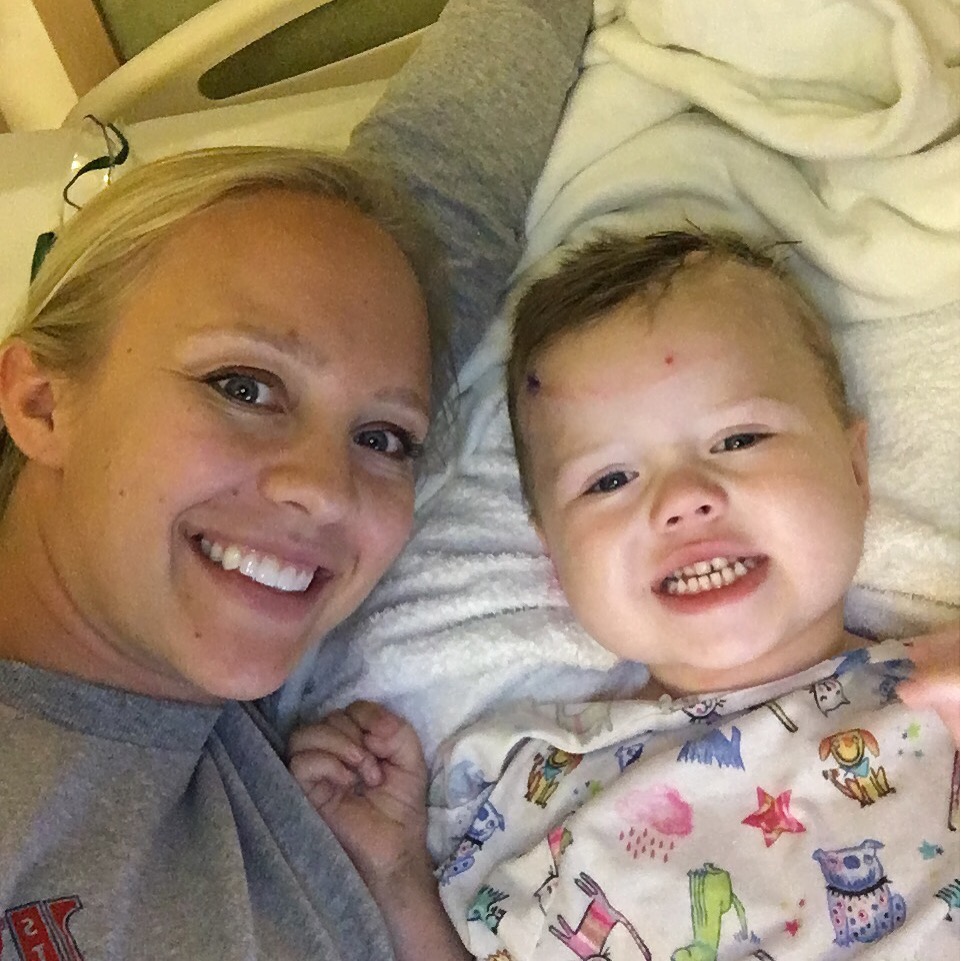 Whew! I’m not sure how anyone imagines these days at the hospital but they are busy and mentally exhausting. They usually start a little before 6am when Mac wakes up from the room being so bright. He then asks for a granola bar. He eats it and then asks for another one. Sometimes even third. Yikes. Then he’ll ask for his iPad and yes I give in to all of these demands. Then the resident comes in talking loudly asking me questions about Mac. Once he leaves we try to fall back asleep for a few minutes before we are woken up by the whole “team” entering our room. It’s the strangest feeling. You’re sleeping then all the sudden you hear the door and now there are 5 people including Dr. O’Neill standing around the bed staring at you. This is your 5 minute chance to ask all the questions you’ve had circling your mind so quick, hurry, wake up and think sharp!
The last couple days Mac’s gone to therapy. The physical therapist and occupational therapist come together. We never know when they are coming. Mac’s moods have been very drastic. Sometimes he’s happy and talking, sometimes it’s uncontrollable crying, sometimes he’s just upset and doesn’t want to talk or play. If you even say, don’t pick your stitches he cries for at least 10 minutes.

Therapy obviously goes better when he’s in a good mood. They really want him to be able to move safely before they let him leave. His walking is very unstable and the use of his left side is limited. His left eye isn’t working quite right. They said that his brain is ignoring that left side. They’ve talked about him staying for a rehab stay but we need to figure out some insurance questions first. We also need to consider if he will participate and let them help him.
So let’s rewind. Surgery went well! I wish I had a video of Dr. O’Neill’s face when he came out. He was chipper and happy! He said that “surgery went great!” and that he got all of the second tumor. He said that it looked different, that it was harder and all came out at once. It will be interesting to see what the pathology is. He said that it would be so unusual to have a 3rd diagnosis. They also placed the shunt which is that permanent drain. Here is a picture of one. It’s not exactly like what Mac has but it’s pretty close. You can see the valve part under his scalp. It’s towards the front of his head on the right. You can also see the tube under his skin when you lift up his shirt. 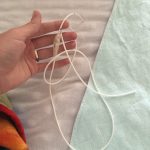 They called us down for surgery at 4:30 or so. We waited in the holding room on the OR floor for a long time. I think Jeremy and I were so nervous we got the nervous giggles. Jeremy was performing magic tricks and tried to put this glove on like a hat. At least it kept us laughing while we waited for surgery. It was a fun family memory. Ironically it was the same room we sat in before baby Mac got his broviac placed. 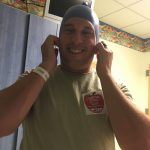 Once it got to be time to go back to the operating room, Jeremy and I had to suit up. Poor Mac. You could see pure fear in his eyes like, why are you dressed like that and what’s going on. I like that we can go back there with him. I wish it was like grey’s anatomy and I could sneak into the gallery to watch. It’s sort of terrifying leaving him laying on the table in that huge room. You just have no idea what’s going to happen once you leave. 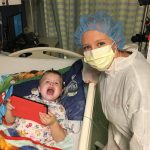 They try to call you every hour while your kid is in surgery to give you updates. It’s so nerve-racking. I got one call and then it was a long time. Jeremy had just walked through the door with our 8:30 dinner and she called again. She told us they were almost done and that Dr. O’Neill would meet us on the 2nd floor in 10-15 minutes. We put our uneaten food back in the bag and booked it to the 2nd floor. It ended up being 30 minutes but it was so great when he came out. We talked about Mac and then we asked him all about his pre-surgery routine and the music he listens to in the OR. We’re so grateful for him.
Once we were done talking to him we went up to the 3rd floor which is the PICU to wait for them to come get us. While I was waiting, I had a great conversation with the anesthesiologist resident who’s son had a brain tumor when he was 2 years old. Not long after that, someone came out saying are you Mac’s mom? He’s asking for you. (heart melts) Yes that’s me! We walked down the quiet hall and we could hear Mac crying 5 rooms away. Yup he’s awake. 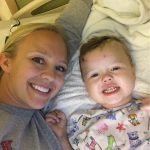 So Mac’s port needle and dressing have to be changed and we asked the OR nurse to do that while he was still under anesthesia. So when we got to the PICU to see him they asked when his last dressing change was and I said that it had just been changed after surgery. Well they looked and the dressing was changed but the needle wasn’t. So… at about midnight they had to reaccess his port. That entails a large needle being poked into his left chest. I was so angry. Really? They could have done this 3 hours ago when he was unconscious but we’re going to do it right now as he just got done with surgery and it’s midnight? I was so mad! They went ahead and did it and the VERY long story short is that it didn’t really get accessed at all. All of the IV pain meds, fluids and other meds he got for the next 12 hours went out and pooled in his chest, shoulder and left arm. They noticed it right before he was going to his MRI and x-ray around noon the next day. We went ahead and took him and since he was so swollen, they couldn’t wrap him up to keep him from moving so they had me lay on top of him in the MRI tube. We finished that and the x-ray and went back to have the nurses freaking out saying they had never seen such a thing. I told them that if I had money for every time someone told me that about Mac, that I would be rich. We took him back down to x-ray and did a dye series to see that either the needle was in the wrong place or the port itself was broken. Since then, the swelling has gone down and thankfully it was a needle problem so yay no surgery for a new port. It was such a bummer to spend the first day after surgery in such an uproar instead of resting. Not to mention how much pain Mac must have been in from missing out on all his meds and having them all pool in his skin. No wonder he was crying without end. 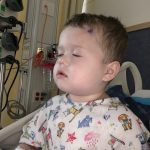 We are back up on the 6th floor managing pain and doing suppositories, watching Mac get chubby from the steroids. 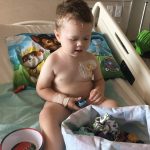 Yesterday the nutritional counseling lady was here and I was talking to her about how to make good healthy habits with Mac. When she walked in at 10am Mac was eating his 2nd hot dog then towards the end of the conversation my grandma walked in with a plate of cookies and brownies which Mac destroyed while this lady watched. I wish I could insert the emoji of the monkey covering its eyes!
So now what? Mac has some time to recovery from surgery before starting treatment. It’s so weird to think we haven’t even started that yet. The pathology isn’t back yet from the second tumor and we haven’t seen Dr Green the neuro-oncoligst in a while. I have no idea how long Mac will do chemo for. Right now we’re trying to get him back to where he was before surgery.
Thank you for your donations on here and on go fund me. We’ve already had bills roll in. We love you guys and feel so loved and supported. I’m hoping to have wristbands available soon and t-shirts soon after that! 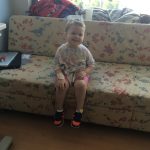