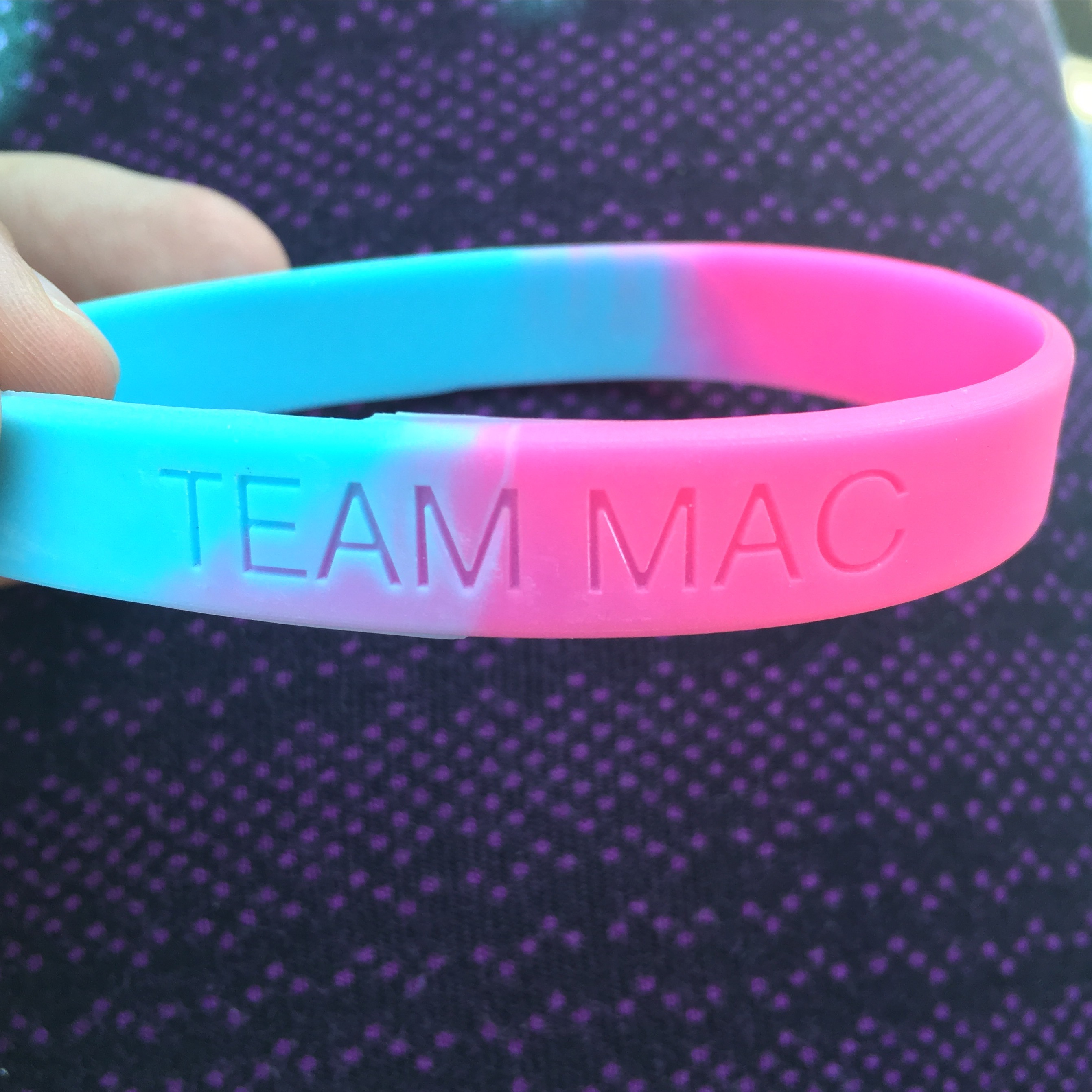 I can always tell when I’m overdue on an update. Family and friends start to ask questions and I realize I’m doing a bad job keeping you up to date! We still go every Tuesday to do chemo in his port and even though he cries, he’s doing much better than he was. Here’s chemo duck and Mac trying to play video games while he waits. 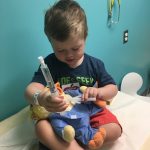 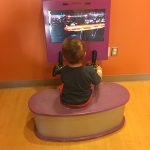 Well, the oral chemo is just no fun. No surprises there! One of the biggest side effects of his oral chemo is inflammation. It’s causing his eyes to hurt, along with full body aches and joint pain. Of course, we didn’t really know this was going on because Mac can’t really communicate those things. Then last Friday he kinda crashed. 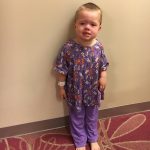 It was scary and very reminiscent of how he was acting right before we found out he had brain cancer. We ended up taking him in late in the day and they were great to get us in. They did an MRI to make sure his shunt was working and it was. His shunt could potentially malfunction at any time and he’ll have it for the rest of his life. Their conclusion was that he was feeling really crappy from the oral chemo. They have him on Motrin around the clock and had us stop the oral chemo for the weekend. They were on the fence about admitting him that night but we opted to go home. He responded to those changes well. He was way more active, sang and danced in the car and overall you could tell how much better he felt. It was sobering. You get used to his usual demeanor and then to see him act so much better is great until you realize it will be short lived. We were instructed to start it back up again Monday at the same dose. So he got a 2 day break. I was disappointed that nothing with the dosing would change but then I remember we’re hoping it’s tackling that tumor and that’s most important. We also had to unexpectedly take Mac to Children’s for eye pain. Because of the inflammation it causes, they have to be careful of uveitis. Can you just imagine trying to get Mac to participate in an eye exam? 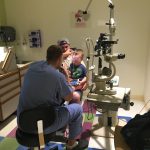 I was encouraged that the doctor did get further this time than last! We didn’t leave that appointment with many answers either. We did talk about his right eye which drifts and doesn’t track with the left. We were given a prescription for a gel that we wipe in his good eye to dilate it and make his vision blurry, forcing his right eye to work harder and hopefully get stronger. Sounds tortuous to me. He will eventually need eye surgery but I think that’s down the road at least 3 months. The oral chemo causes light sensitivity so that on top of having a dilated eye makes them really sensitive. This is Mac driving to an appointment with a shirt over his head to block the light. 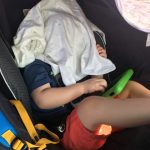 He has been doing lots of therapy. He does psychical therapy on Tuesdays with his chemo and then occupational and speech on Thursdays. We’re trying to give him as many tools as possible to overcome the deficits he suffered from the tumor and from surgery. 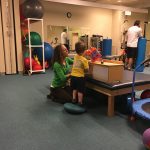 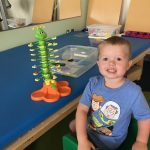 I’m so proud of him. One thing we’ve been stressing how he goes up and down stairs. If he goes, “righty” then “lefty” and trades off, he gets stickers. His right leg is the weak one so we’re trying to get it strong. Interestingly it’s his LEFT arm and hand that struggle. You’d think it would be strictly one side of the body but we’re all over the place 🙂
So we ran out of wristbands so I needed to order more. I saw these ones that have blue and hot pink and knew we needed them! I have a lot of them so if you want to order some, go for it!! I’ve been so uplifted by friends wearing their wristbands with their families, going fun and far places and taking pictures with their TEAM MAC wristbands. They always bring me to tears. So THANK YOU! You really have no idea how they strengthen and comfort me. 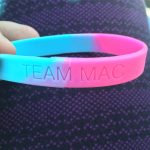 Mac’s hair was thinning a bit so we buzzed it a little. He looks cute! When do kids start to like haircuts? Ok he doesn’t have to like it, when do they start to tolerate them without screaming and crying and getting hair in their mouth. haha
You ready for some awesome news?! I’m so grateful for my step-brother Mitch. He put us in contact with someone at Make A Wish! We’ve been in contact for the past couple months and this week Mac did his wish interview. The sweetest retired couple came to our house and asked us all about Mac and all of his favorites. They even brought a gift for him and for Bo and a Make A Wish hat! I put the boys and myself in Mickey shirts and they quickly caught on and said, I think I know where this is going! 🙂 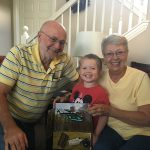 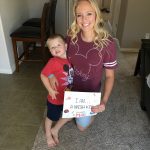 One of the questions the office asked me before this interview was, “Can Mac verbalize his wish?” Well he can talk, but is he going to talk to you? haha I don’t know! We had the weekend to prepare for this interview and I kept asking Mac, “What’s your wish?” “DISNEYLAND!!” we practiced! haha yes that is the wish! Ever since he went for that day right before all of this went down, he won’t stop talking about it. He has to get medical clearance to go, and I don’t know any details but we’re so excited for him. It so incredible to me that such an organization exists. Every time I read their stories I cry. It’s so awesome.
The other day I needed to look something up in the TEAM MAC photobook I made for Mac about his journey through AML. It was the strangest experience. It was difficult to turn through those pages and remember all that we’ve already been through. It also made me realize how raw it is to be on this side of it. When I made that book, I knew the outcome of his AML and without trying, that was my perspective as I wrote it. Right now, I don’t have that. We’re in the trenches. We’re displaced, uprooted, and shocked. We drive to Children’s multiple times a week and cut up chemo every morning and night not knowing what the outcome will be. For some reason as I was contemplating all of this, something from my patriarchal blessing came to mind. That my prayers will always be answered, not always as I wish, but in a way that is best for me. I realized just like it says in D&C 122:7 that “all these things shall give thee experience, and shall be for thy good”, what we experience here is for our GOOD. Heavenly Father knows what’s best for us. I take comfort in believing that. Tonight we were watching a Rio preview and the new Katy Perry song and video “Rise” was premiered. I had heard the song on the radio but as I listened to the lyrics, I thought of Mac.
“I won’t just survive
Oh, you will see me thrive”…
“Oh, ye of so little faith
Don’t doubt it, don’t doubt it
Victory is in my veins
I know it, I know it
And I will not negotiate
I’ll fight it, I’ll fight it
I will transform”…
“This is no mistake, no accident
When you think the final nail is in
Think again
Don’t be surprised
I will still rise”
These are just some of the lyrics but hearing it and thinking of Mac brought tears to my eyes. He’s doing incredible things. He’s got victory in his veins. This is no accident. All of our trials and happy times are for our good and no matter what we are going through we CAN thrive.