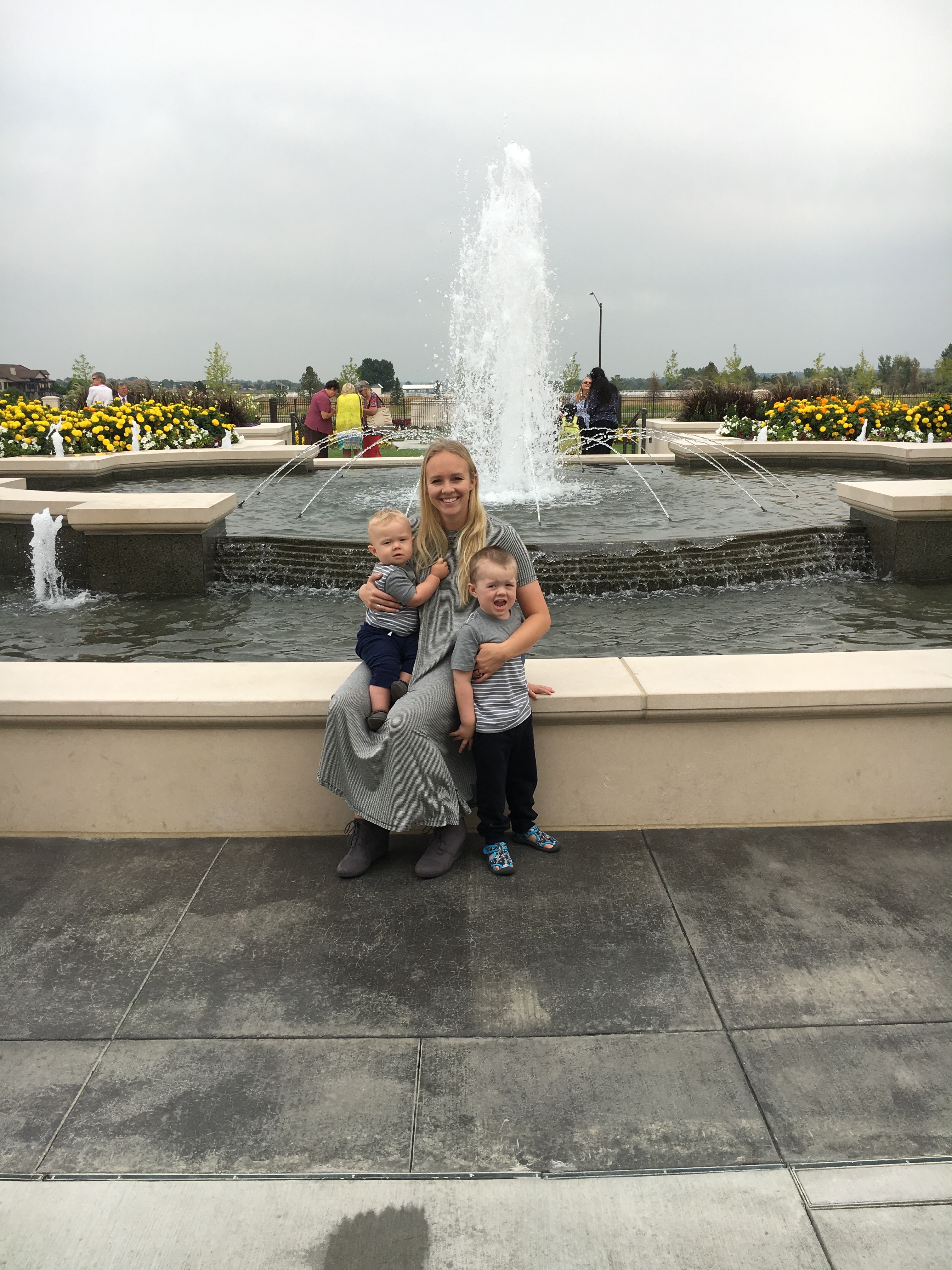 Yesterday I was going through my phone trying to make more space so I can actually take a picture, and I was watching videos of Mac. I was brought to tears when I watched the one of Mac walking for the first time after his surgeries. I can’t believe how far he has come. It was so scary to see him lay in his bed, knowing that he couldn’t walk, that he couldn’t move his left arm or hand. We didn’t know where he would end up. I remember wondering if Bo would teach Mac to walk or if it would be the other way around. Those videos and all my memories of his fight through AML and now through this, are such a testament to have faith. The grind is tough. Not to mention I’m just the mama. I can’t imagine how Mac feels every single day as he is asked to endure so much. I can tell that his life is requiring him to be so mature and he’s really rising to the task. A few weeks ago, he was in a lot of pain. He would ask for us to hold him and he’d say, “my legs don’t work” or “my hands don’t work”. We would rub his back and feet for a long time before he would fall asleep at night. They started him on a medication for nerve pain. Now he is on that and ibuprofen multiple times each day and it is helping. They also did a half dose of his IV chemo the last two times and that has made him feel a lot better too. We are still reminded of his sensitivity to sun. 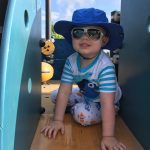 He’s developed a rash from his chemo, but it doesn’t seem to bother him too much. 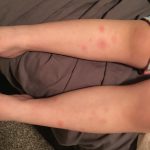 He usually needs a nap midday. We go to the hospital Tuesdays and Thursdays and he loves days when he gets to stay with Bo. He doesn’t love to share his toys but he sure does love his brother. 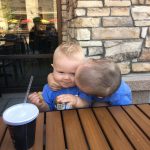 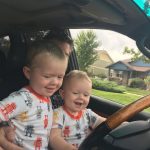 He was loving his motorized boat until it got tangled in something at the pond :/ We’ll have to find a new one 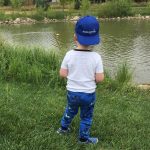 Here is Mac at Lowe’s loving this witch! haha 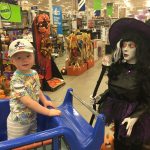 Here are some pictures of Mac and Bo when we went to St George. We were able to see friends and family and me and my friend took the kids to a childrens museum that Mac loved. 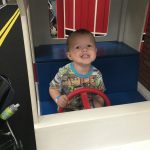 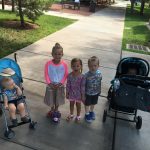 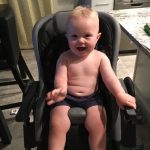 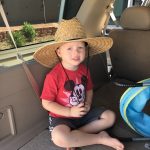 We also had the wonderful opportunity to go to the Ft Collins temple open house a couple different times! It was so beautiful. Mac LOVED it! Both times he asked for “more” when we got done so we walked it twice both times 🙂 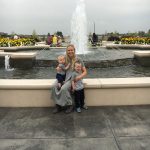 So last Tuesday was his first MRI since starting chemotherapy. I didn’t have too much anxiety over it because I think if therapy wasn’t working, he would show signs but just the unknown is a little nerve wracking. Mac hates being in the room with all the equipment and the bed where they put the mask over his face. 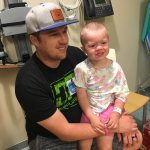 I don’t think it means much when we say, it’s ok it’s just for a picture of your brain. I think to him it’s scary no matter why he’s being put under. He woke up pretty happy and we went up to do his chemo while we waited to hear from the doctor about how it looked. He walked in with a smile and said that he was happy with how it looked. 🙂 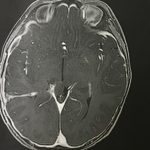 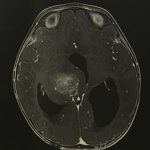 The picture on the right was before surgeries with the large tumor there in the middle and the one on the left was last Tuesday. So that was good! I think we wish this whole thing was a little more straightforward. Dr Green said that we will continue to do exactly what we are doing. It’s a little too far away to speculate this but possibly after that year of treatment, they will take him off of the chemo and see if the tumor grows, at which time they would put him back on it. It isn’t definitive which is leaving us really up in the air. What to do about our house, our jobs, our life. Where does this leave us? I think it’s too early to tell. I remember Dr Green mentioning a long time ago that some people take the oral chemo for life, until it stops working. Because there is no one else in the world with Mac’s tumor and situation, there is no protocol. They are creating it as we go. Thankfully, the scans prove that what they are doing is good for now. They really wanted to do genetic testing on Mac because the odds of him having two unrelated cancers one including a never before seen tumor, is unheard of. I think they were anticipating finding a genetic explanation. All of the genetic testing is back and nothing was remarkable. Hmmm. There are a lot of possible explanations but the bottom line is that we don’t have an explanation. What’s bringing me comfort is that we might have no idea WHY Mac had AML and now has brain cancer with this rare tumor, but Heavenly Father knows Mac and is always watching over him. I think that has to be enough for me. It think that’s what faith is. Believing that Mac is a child of God, that I don’t have to understand everything for it to be ok. I don’t want to live this life without Mac but no matter what, I know how special he is and that our family will be together forever.
So what’s on the horizon? A lot of the same. Chemo in poptarts, lots of oral meds, lots of sticker charts, and trips to TARGET (not walmart per Mac) 🙂 to pick out toys. He’s doing great with his therapies. He loves physical therapy the best. The occupational therapist wants to make Mac a cast for his right arm (his strong arm) to force him to use his left more. The cast appointment is on Wednesday along with an eye appointment. I’m really not sure what they are going to do about his eyes. I know they want to do surgery but I don’t feel like his eyes consistently do the same thing enough that correcting it right now would be a good idea, so we’ll see.
Here is Mac at speech therapy. I can see his through this window but he can’t see me! The therapists are so wonderful. 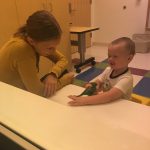 This is occupational therapy playing connect 4. 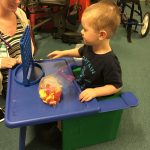 This is Mac waiting for his chemo watching his “green iPad” 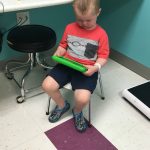 Well that’s the update! Team Mac is the best. We feel so blessed. Facebook comments, random texts, generous people offering to sell wristbands, it’s all such a blessing to us. Thank you for being here and joining us on this journey!