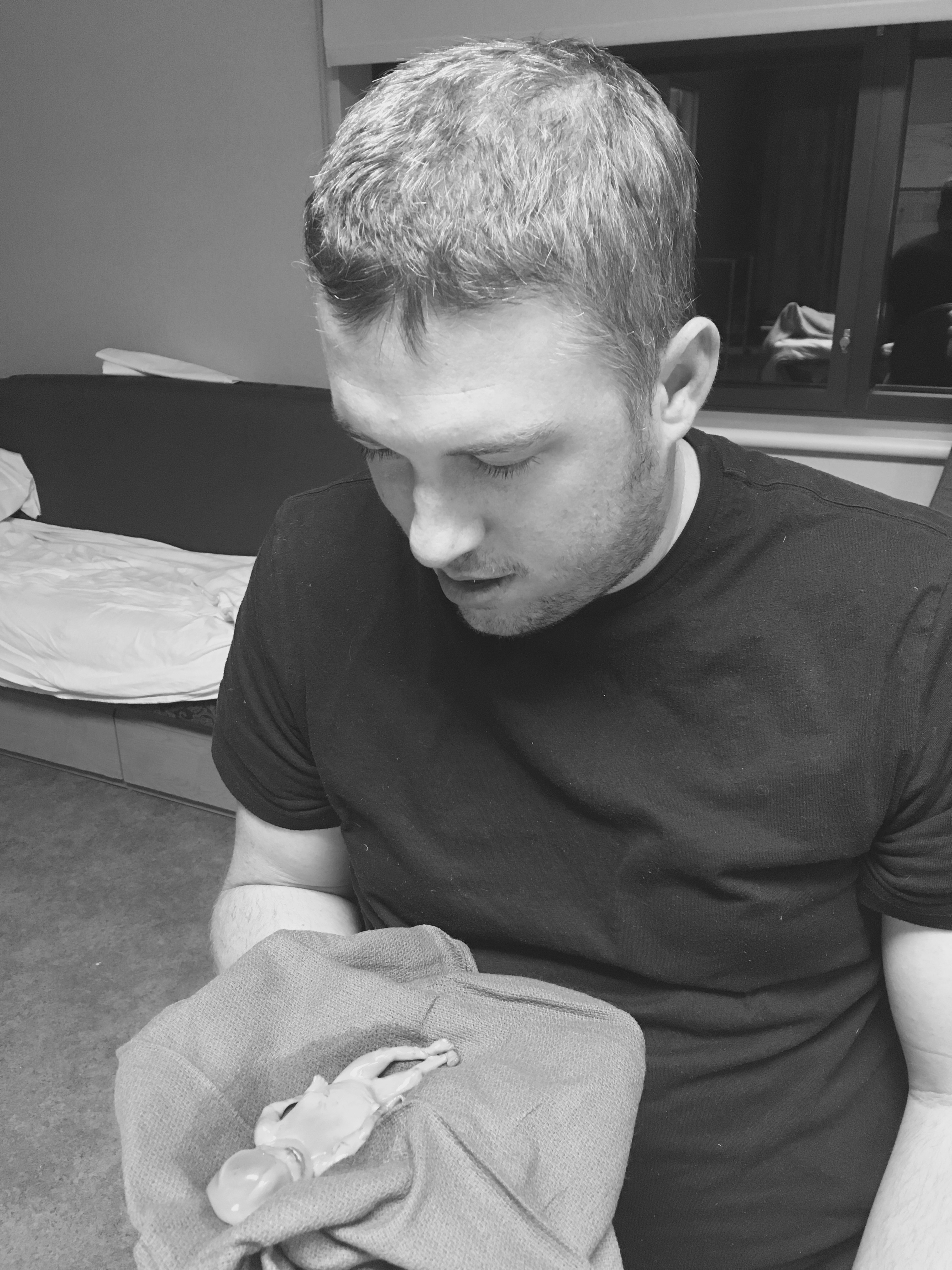 It’s almost been one week. Last Tuesday I dressed the boys in matching clothes and all four of us headed to Lonetree to my 20 week ultrasound appointment. We were giddy with excitement over not yet knowing the gender of our baby. The boys talked to the baby every night right after we read scriptures. We had fun talking to Mac about what the baby’s name should be. We walked in, and told her that we wanted the gender to be written down in an envelope. My mother-in-law was planning a gender reveal party for the day after we arrive in St George for Christmas. As much as I wanted to know the gender right then at the appointment, I was so excited to have that party. I wondered how they would surprise me. Everyone kept saying, I hope it’s a girl but Jeremy and I were both really hoping for a third boy.
I laid down on the table and everyone crammed around. Mac kept talking about checking on the baby. The first thing I noticed was that unlike most ultrasounds where she chases the baby around, it was a bit curled up and didn’t seem to be moving. Within 10 seconds I asked if the heart was beating to which I received silence. Just silence. Another 20 seconds went by and I tried to speak louder and said is everything ok? I looked at Jeremy like, please say this isn’t happening. The normal whooshing sound was just nothing. She replied by saying, I can’t find a heartbeat.
My doctor came in and they checked again. Nothing. She told me that I was far enough along that I would need to go deliver our baby. I could have never been prepared for this to happen. Didn’t I just buy a my baby new things on black friday? Wasn’t I just day-dreaming about having three kids? And it’s just over? No, I didn’t want to go home for a day. I couldn’t. Instead, all of us walked into the wing of the hospital where you deliver. Mac actually remembered coming to see Bo and asked if his cousins were coming to be with them. I told him I wish they were. This is not what I pictured. I had both Mac and Bo at that hospital and all the emotions came back to me. It wasn’t the crazy excitement as you waddle through the doors to the delivery rooms. It was heartbreaking and terrible. I proceeded to sit in a cold hospital gown while I cried and waited for hours before anything got started. 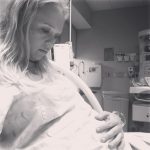 Our nurse for the first few hours was actually the same nurse that was with me when I delivered Bo. Her name was Sigrid and it sure was a blessing to have her there. Before she left that night, we had a great talk and I cherish that. They didn’t waste any time and a social worker was in to talk to us. She had to talk about our choices of what to do with his body. I just cried and cried. What an aweful thing to have to think about. Just a few hours before, I pictured him as my third chunky baby that I was going to cuddle and who was going to be loved so much by his big brothers.
It was so lonely. I had so many thoughts and feelings but didn’t want to talk to anyone. Fortunately, but unfortunately, I have a close friend that I lived with in college that delivered her sweet angel baby at full term. I was able to text her during that time and it was such a blessing to me. I couldn’t do this without her and her testimony of our special children. Bless you Erin.
They came to place a pill to get the process started. They didn’t know how long it would take as it is different for everyone. I hated that it was taking a long time and yet I didn’t want delivery time to come. It really was a moment where you realize that time is going by and there was nothing I could do to change what was happening. It was a good time that Jeremy and I were able to just sit and try to process what was going on. We were blessed with comfort and personal revelation. We realized how special it is that we have a child, and our kids have a brother on the other side. Someone to watch over us. Especially sweet Mac and all that he faces. I could feel a special bond between them. It was at this point, I was sure it was a boy. I could just picture this child with his two brothers. It comforts me so much to know that all of us have someone really special waiting for us.
After 4 hours or so, I was really hurting. They had a monitor on me and it wasn’t reading any contractions but I was in a lot of pain and having to breath through contractions. I decided to get an epidural. It was so hard to think that all of this wasn’t going to result in a crying baby that I could hold and nurse and take home. How big would he be? And how fragile would he be? I just kept praying that he would come out and I’d be able to hold him. I was scared of what he might look like. Within 15 minutes of getting the epidural, he came. Jeremy and I were the only ones in the room. I frantically hit the call button and sent Jeremy running to the hall. Our nurse came running in and she looked at the baby. She started crying and her and I locked eyes and we both just cried. She hugged me and and we waited for my doctor to arrive to cut the cord. Dr Leman was there within 10 or 15. She cut the cord and handed me our baby BOY! She said, I think that’s all you two make 🙂 Right as I saw him, all my fears disappeared. It wasn’t a scary moment at all. He was perfect. He had eyes, a nose, a mouth, 10 fingers and 10 toes, a big tummy, big thighs and skinny calfs. I just wanted to kiss him. We held him for the next couple hours. We talked about how much we love him and how grateful we are that he’s in our family. 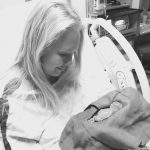 Dr Leman had said that we might be able to tell once we saw him, why this happened. When she saw him, she said that he looked just how he should and that she couldn’t speculate any reason this had happened. She ran a lot of tests on me and so far all of those have come back with nothing as well.
Our nurse jumped in on our name brainstorming. We have the toughest time with boy names. I just looked at him and I could feel his spirit. He seemed strong and confident. I felt his contentment. I feel that just like Mac, he knew what was ahead and was ready for it. He seemed easy going and light. We each threw out a name before Rex came to mind. I told Jeremy that I knew Rex was right because any time I say his name and think about him, I smile. We decided on no middle name. Even after holding him for those 2 hours, I wasn’t ready to let go. He stayed right there with us in the little bed next to mine. I tried to sleep from 2-7am but between being woke up by the nurse and having nightmares which unfortunately have continued, I didn’t sleep much.
Morning came and it was time to call funeral homes. I took one look at that long list and just sobbed. I made Jeremy make the phone calls. Even though I’ve been terrified of cremation all my life, our decision was to do a cremation that way he will be with us. Because of Mac’s cancer treatment being in CO and our house being in UT, I just couldn’t come to terms with burying my baby knowing I could end up a state away from him. Jeremy said something that has really helped me and it’s that this is just Rex’s physical body. Rex’s spirit is watching over us, loving us, waiting for us. He can be with us always. We didn’t lose a child, we just have him in a different way.
I knew that I wanted Mac and Bo to come see Rex. By morning time, he wasn’t looking as good as he did the night before so we didn’t pick him up but we watched him sleep in his bed. It was wonderful to have all my boys together. 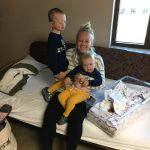 Bo said “bay-bay” for the first time 🙂 He waved and blew him kisses. We told him how much we love him and miss him. It was a special time. Leaving him in the room as we walked out was the worst part. I couldn’t believe I had to do that. I still can’t. I told the boys that he can’t leave with us in our arms, but he’s coming with us in our hearts. We get to pick him up on Wednesday. This is a really tough thing to go through but we’re so blessed to know that because our Savior Jesus Christ came to earth and suffered for us, and was resurrected, we’ll be with Rex again. I’ve cried a lot of tears but behind my tears is a lot of love for Rex and a lot of peace. I think about him everyday and that’s what I want. I want him to be remembered. I appreciate hearing other people say his name and talking about him. I wish I had more to remember him by. I love my babies so much and Rex is no exception.