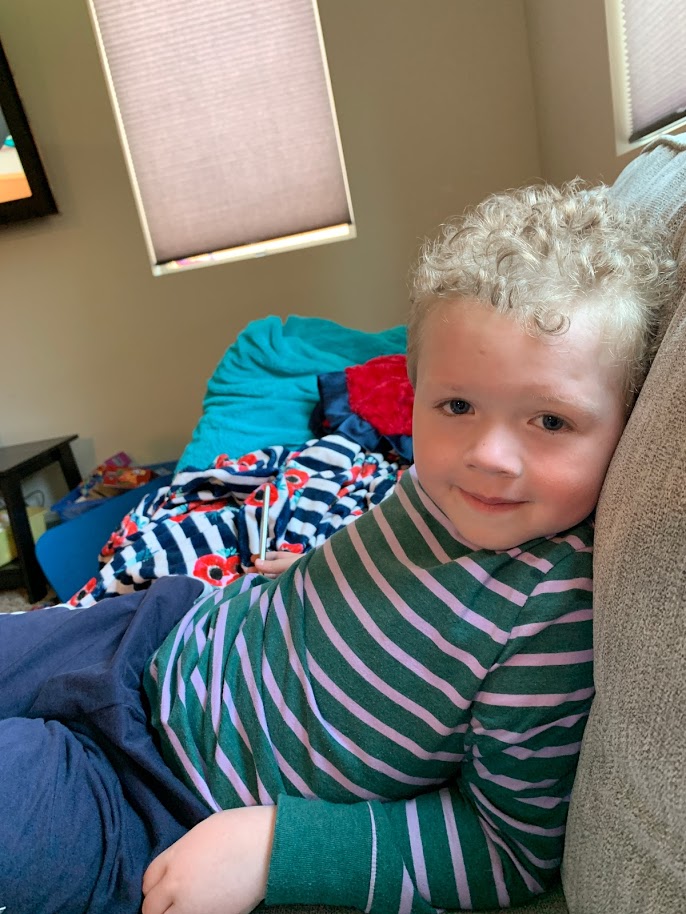 Sometimes things don’t go how you expect and you are forced to forge a new path. When I wrote the blog around Mother’s Day, I said that I would update again in mid July with his MRI and eye surgeries. Well, things have changed and I thought the blog was the best place to come. It has been an incredibly difficult past 3 weeks. Mac’s side effects have been the worst I’ve seen them. I posted that picture of his chemo bumps on his legs and they have never been that bad. He’s been really struggling to get through each day. On June 7th we had a wedding to go to and we all got ready and while I was putting on his shoes, he looked me in the eyes, started to cry and said, “I don’t feel good. I don’t think I can go anywhere.” I knew we needed to stay home and show him that he’s our priority. He’s taking ibuprofen and zyrtec around the clock to no avail. On Sunday, he was in his Sunday school class and burst into tears. He said “I’m just so tired, I need to go home”. I can’t tell you how painful it is to watch him suffer. You know when you are sick or hurting and you just have no energy or patience? That’s how Mac is all the time. Him and Bo have been constantly fighting and it’s SO hard. He’s been sleeping poorly, he’s had diarrhea, and doesn’t look well.

Mac always takes his chemo without a fuss. A couple weeks ago, in the midst of these really tough times, I brought him his PM chemo and the most bizarre thing happened: As I went to put it in his mouth, I watched his body have an immediate reaction and aversion. Like when you smell rotten milk and your body knows not to drink it. Kind of like that. I’ve never seen him do that before. I asked if he wanted to take it a different way but he choked it down like usual. I’m trying so hard to get him to try to put words to how he feels. He keeps so many emotions inside and it’s so hard. One night he was crying and I asked him if he had any words and he finally said, “I don’t like how my body feels”. I was so proud of him and so heartbroken. That night I messaged Children’s about considering a few days break from chemo. It took them a couple days to get back to me and when I talked to Dr. Green, he said that we need to switch him off of the vemurafenib and mekinist combo to a dabrafenib and mekinist combo. I said ok and we agreed that we would stop this current combo until the next week when we could start the new one.

That weekend (last weekend) was so mentally exhausting for me. I wrote out my thoughts into flow charts, I prayed and prayed. Every time Jeremy saw me, I was listening to conference talks or listening to my scriptures. I was searching and trying to listen so intently. Mac’s quality of life was terrible and I didn’t know how we could continue one more day. What I was wrestling with was, should we take Mac off the chemo at least until that July scan. I know the doctors don’t think it’s a good idea and I know we might be taking a great risk. I don’t know how to describe the pressure of making life and death decisions for your 6 year old son. It’s so heavy. The question I kept asking myself is, can I live with the outcome of my choice? Can I keep giving him chemo that’s making him so so sick and watch him suffer? Am I willing to take him off and risk that it will grow and we won’t be able to control it and it will take his life? Tough tough questions. There were many times I wanted to pick up the phone and call my family or a friend and just talk it out but something kept me from doing that. I knew that my answer needed to come from studying it out in my mind and listening for guidance. I was hopeful that Jeremy and I would end up on the same page and we did.

By Monday we had decided that we were going to tell them that we wanted him to be off at least for the next 4 weeks. He’ll need to be off right around the eye surgeries so that he can heal better also. I thought they were going to call early in the week but I didn’t end up talking to anyone until Thursday. By a true miracle, it was his nurse Melissa. Melissa has been with us since the very beginning. I remember her sitting right next to me 3 years ago, as we talked with Dr. Green and Dr. O’Neill about his big brain surgery treatment plans. She’s unfortunately leaving this neuro-onc team for a different position and I’ve had to talk to different people the past 3 weeks. Somehow I was able to form my words to say that his quality of life is just suffering too much to continue and switch to this new combo right now. She was willing to pass our thoughts onto Dr. Green for me and I talked to her Friday and I guess that will be our plan as of right now and we will re-evaluate in July.

I feel that refiner’s fire fiercely and I just pray that I can do right by Mac. He means so much to me, to Jeremy and his brothers. We’ve already witnessed such a change in his demeanor. This week I’ve seen him play and talk and smile in ways I can’t remember. I don’t think we even realized the magnitude of how bad he felt.

Jeremy gave Mac a blessing a couple weeks ago on a really tough night and it talked about Mac exercising faith. This life we are living is the ultimate lesson of building and relying on faith. I can talk to my kids about it but we are really having to live it. I’m tucking my sick child into bed and saying, rely on the Jesus Christ “to ease the burdens which are put upon your shoulders, even that you cannot feel them upon your back”. Mac is such a special boy and he’s really being called to learn these things at such a young age.

I don’t know what the future holds. Right now we are going to focus on the next 4 weeks of Mac feeling hopefully the best he ever has. We are trying to savor every minute of it. I know that worry isn’t going to change anything. I do believe in miracles and I know that we can only do our best and we’ll just have to live with the consequences good or bad.