“If this is your break, I want you to enjoy it” 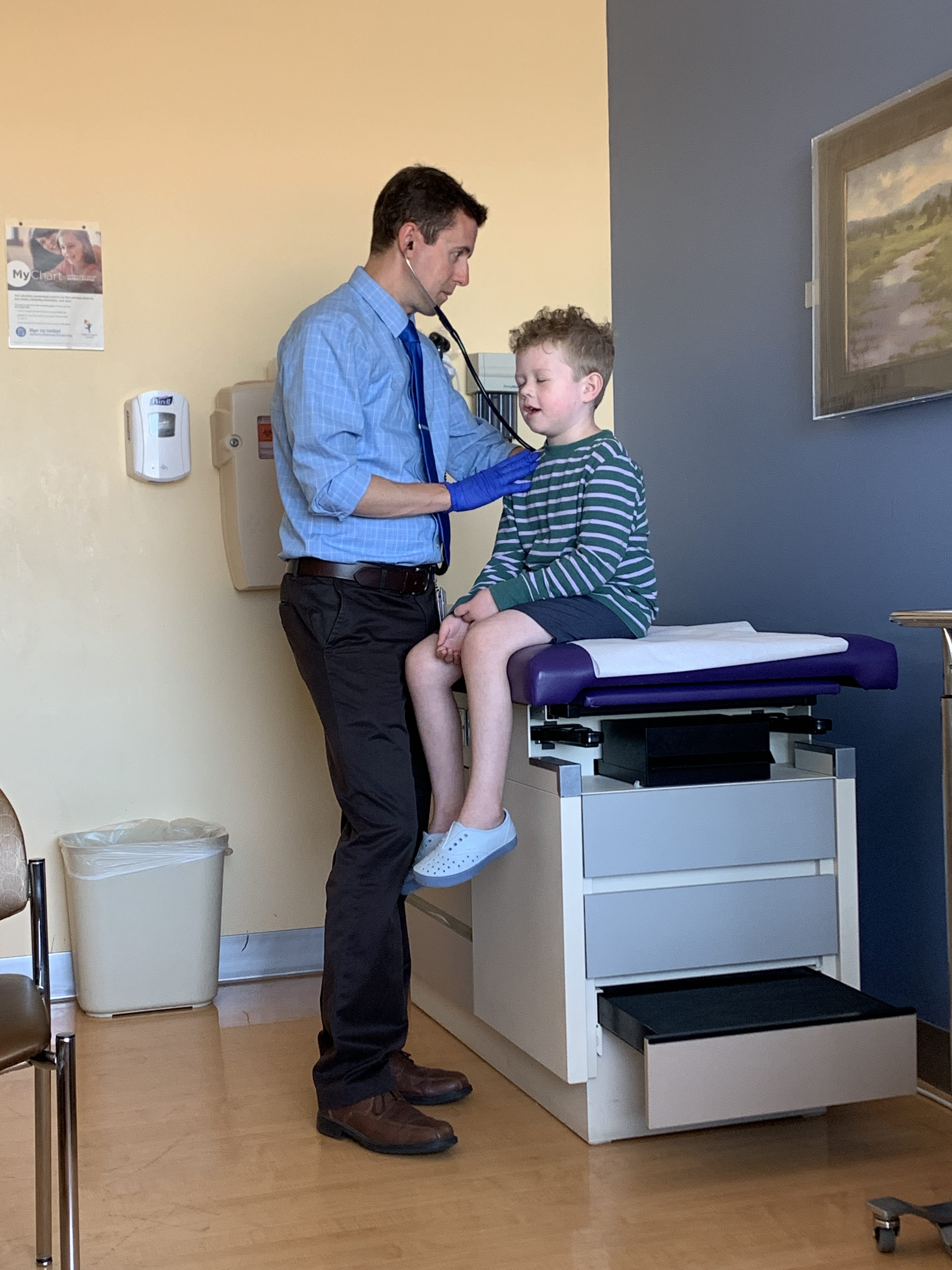 It usually takes me a couple weeks after these big surgery and MRI days to really process all that has happened. I can always look back and see the hand of the Lord taking care of Mac each step of the way. One thing I can say is how grateful I am that we went ahead with these eye surgeries. A year ago when she first talked to us about needing to do yet another surgery on both eyes it felt very overwhelming. It is difficult to continue to ask so much of Mac but we feel strongly that it’s really important. All these surgeries and therapies are really hard at the time but oh how they improve his quality of life. We really want for him to live the BEST life he can so we push forward with difficult things.

Thursday night before the big day which was Monday, Mac said that his neck hurt and when we looked, there was a very visible lump. We were really nervous and concerned. By no coincidence, Ty and Bo had well visits the next day so we were already going to be at the pediatricians office. He suspected that it was an infected lymph node but wanted to do blood work because it’s Mac. So there was Mac, who had been asking all morning, “this appointment isn’t for me right? Just Bo is getting shots?”, then the lady came in to not just to do a finger prick but to get blood from his arm. After a lot of screaming and holding him down, she had stuck both arms with no success. It was bad. They wanted us to go to Children’s but we declined and said we would start the antibiotic and keep a close eye on him. The pediatrician called later to say that Mac needed a chest x-ray so we said we would do that Monday when he was already at Children’s. The next day he had a little fever, didn’t want to get off the couch, only wanted to watch his iPad and was really retreating. We didn’t know what to do. I’m so grateful for a wonderful husband and the power of prayer. We were panicked stressing and realized that good decisions are NOT made in that mindset. So we decided to eat dinner and each say a prayer, then reconvene and discuss. We did that and felt ok about not calling anyone or taking him in and just letting him get a good nights rest. Each day after that got better and the chest x-ray was clear. As Dr. Green said, Mac’s allowed to have regular things happen to him too.

I think the stress of the unexpected arm pokes and taking the gross tasting antibiotic added to Mac’s anxiety about Monday. The MRI and surgery day was long. It started rough because the person that checked us in didn’t click a button that said we had arrived. So we were already there and getting a chest x-ray when a nurse called quite upset wondering if we were “going to show up today”. I assured her we were there even though I don’t think she believed me. I notice that when radiology (MRI) and OR (surgery) have to communicate, it never goes smoothly. All the commotion got him going under anesthesia an hour later than anticipated and therefore, he missed his dermatology appointment. Thankfully his skin is looking much better so I think it’s ok. He was really nervous about going under anesthesia this time. There were a few MRIs that he had very little trouble and did great with his “babies”. It is so difficult to know how to best prepare him for these things. Balancing being prepared vs causing stress over things that he can’t change. In hindsight I would have done things differently. The night after surgery we were laying there and he started crying in pain. He said, “It was that mask. What did they put in my eyes with that mask?” He was talking about having to breathe into the mask to go to sleep and waking up with his eyes hurting. I felt so guilty and sad. Thankfully he woke up a lot better than he did after the last eye surgery. He woke up slowly because they gave him extra anesthesia to do the echo and EKG. He didn’t talk for a long time or open his eyes but when I said, do you want to go home? He nodded his head. 🙂 He knew that the plan was to get some legos afterwards so then we started talking about that and the head nods continued. 🙂 He was also able to nod that he wanted a blue slushy and he enjoyed Jeremy feeding that to him. The next couple days he was in pain but he didn’t let it slow him down too much. On day 3 I realized that his squinting was from his eyelashes being stuck shut from all the drainage. Once I got rid of that, things started going in a good direction. At the follow up, Dr Jung said that there was a lot of scar tissue she had to lyse and she was really surprised that he looked good!

So on to the chemo plan. Whew. It’s always overwhelming. This time was different because we were coming into the discussion with thoughts and feelings of our own. May and June were the worst months Mac’s had as far as side effects go. I know I talked about that in my last blog post. So Mac had been on about a 4 week break from chemo before this MRI. I didn’t get the impression from them that 4 weeks would be enough time for them to see growth on an MRI so when that was the case, I wasn’t surprised. The MRI showed no change. We went into our meeting with Dr Green knowing that we wanted to push for more of a chemo break unless there was growth. I have felt for a long time that Mac needs to take a break from this chemo. I don’t have any reassurances that it will turn out a certain way, just that he was really suffering. So that’s what we talked about with him and I thought he did a good job explaining the 3 potential outcomes of a break. He said that it makes the most sense to re-scan in 3 months because time shorter than that, they might not be able to see a significant change on the scan. That feels like kind of a long time to me but remember this isn’t blood work where it is cut and dry and they know how many cancer cells there are. This is all done by imaging. So he explained the 3 scenarios like this:
1- possible but not probable– after 3 months there isn’t a significant change. Maybe 3 months isn’t long enough to see a change. He said we could put him back on chemo or talk about going longer.
2- most probable– after 3 months there is growth and we put him on the new combo of debrafenib/mekinist and the tumor RESPONDS to the chemo and we are able to regain tumor control on chemo.
3- possible but not probable– there is growth and we put him on the new combo (because the old combo was making him so sick) and the tumor DOES NOT RESPOND and we aren’t able to get the growth under control. Yuck. That is difficult to type out.
So, that’s where we are at. There is no literature that suggests that a high grade glioma could come off of chemo forever. We are taking it step by step making the best decisions we can along the way. Dr Green’s words were, “If this is your break, I want you to enjoy it”. It feels like a lot of pressure. I’m not sure how to do it but we really want to make this time count while he’s feeling good and not suffering from aches, pains, sunburns, etc. knowing we might not get this time again.

His next MRI will be in October and I’ve talked to Mac a little bit about doing it without anesthesia. He would still need the IV so he would be awake for that which would probably be the most difficult part. I think the scan is about 45 min long and he would need to be totally still. We’ll see what he thinks as we get closer but I don’t think he wants to do the mask again either. I told them that I need help supporting Mac and navigating this as he grows and understands more and more. I am hoping we can meet with child life before the next scan and they said they can walk him through everything. Maybe he would do best with straightforward information.

I want say a big THANK YOU to everyone for your prayers and support. It really means the world to us and we couldn’t do this without TEAM MAC! I’m so excited and grateful for everyone that donated and ordered shirts! You guys are seriously the best! We were humbled by how many people are here and standing with us. I am sending a hug to each and every one of you. We love you so much and don’t forget to send me pictures!