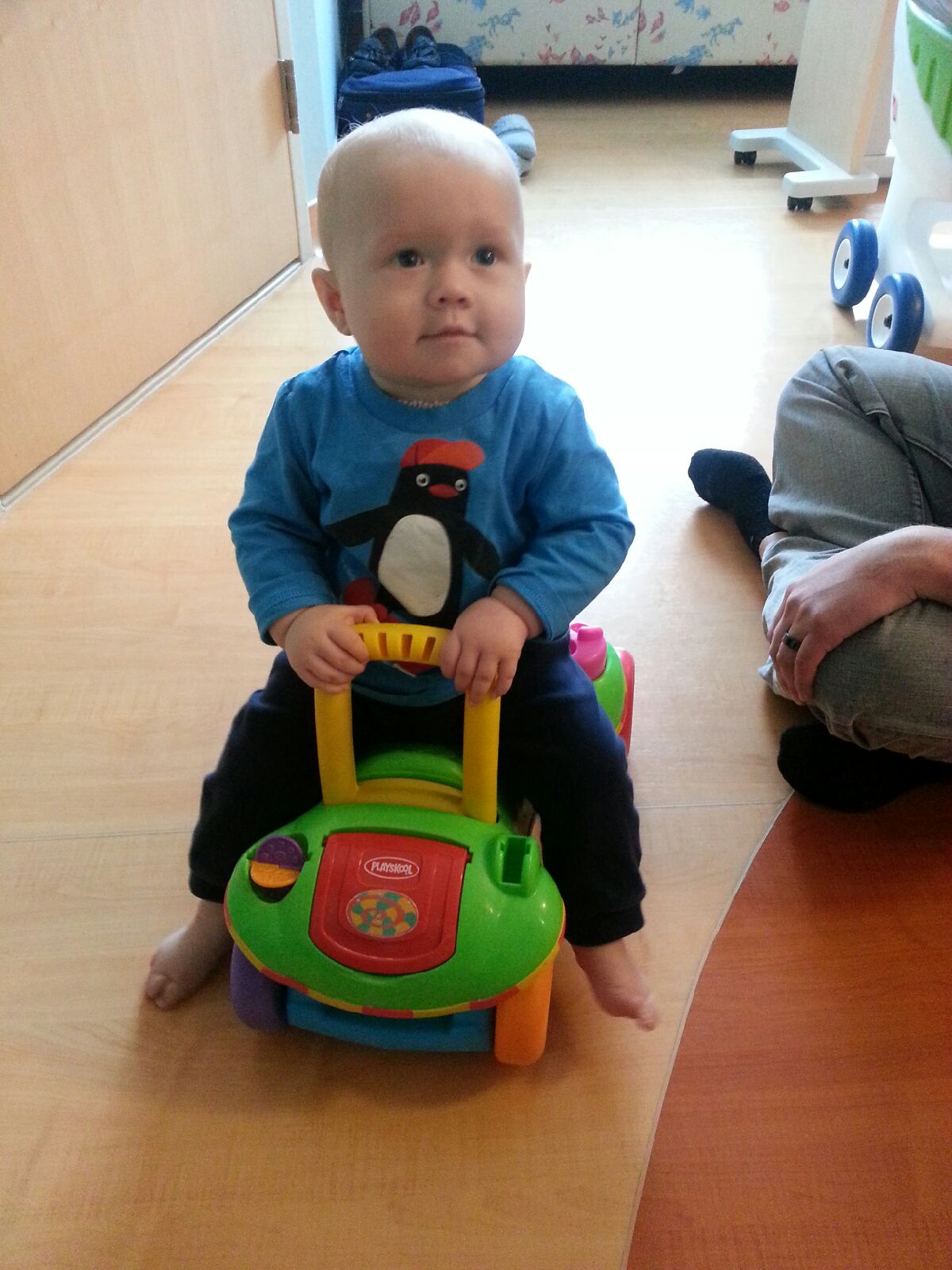 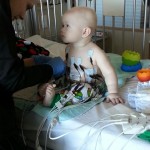 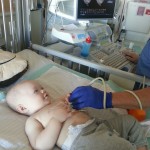 It is Day 8. He had five days of high dose chemo and now his counts will go down and then we wait for them to recover. They estimate that we will be here about the same amount of time so 3-4 weeks. He is still pooping blood but they have no idea why. They checked again for infection and it came back negative. Sometimes his stomach hurts when he sleeps and he moves and sleeps like a stink bug with his booty in the air! No fevers yet either! Oh fevers, stay away! Overall he’s been pretty good. The chemo makes him tired and even though he’s taking anti-nausea meds he’s still thrown up a couple times. 🙁 He’s lost a little more hair and there isn’t much left. I love feeling his smooth little head.

He loves to stand in his “cage” (that’s what we call his crib). They found him a little scooter (see picture) to sit on and he pushes his feet and goes backwards on it. We’ve been teaching him to count to 10 on his fingers and now he holds his little fingers up when we do it! It’s super cute. He’s also been doing “so big” and putting his hands up in the air!

Jeremy went to Las Vegas for a few days for a business leadership event and my mom came to stay with me and Mac. It was so great to have her here! It is really difficult to do this alone. Not only with daily tasks but mentally and emotionally too.

My mind has been on faith a lot lately. Mac and I were out for a stroll around the halls and we ran into the doctor that we met in the ER, the day he was admitted for his cancer. It took me back to that day. It was such a whirlwind, but I remember it like yesterday. But what it really made me think was, wow… If in that moment of tears, when we first met the doctor, If I could have seen down the road to this current moment, I wouldn’t have been so scared. I would have seen that there were a lot of ups and downs but Mac’s still here and he’s smiling. He went to the PICU but he also left the PICU. He didn’t eat for days, but now he’s nursing again. And then it hit me. That’s what FAITH IS. It’s allowing your soul to be calm and knowing that Heavenly Father has a plan. I was reading my scriptures and came to this verse: 1 Nephi 11:17 “… I know that he loveth his children; nevertheless, I do not know the meaning of all things”. He LOVES his children. I thought about Mac and I am so comforted to know that He loves Mac. I want to be a more faithful person. I know that there are scary times and sad times but He knows the end from the beginning. I can’t see another two months down the road but I resolve to take it one day at a time, knowing that Heavenly Father loves Mac.

I feel so blessed to be Mac’s mom. What a special special gift he is. I am grateful to be in the hospital with special nurses that love Mac like he’s their own. I’m so honored to watch Mac fight through his treatments and its incredible to see the chemo working.