Well it’s unexpected but Mac’s having his next surgery this evening. It’s scheduled for 7:30 but if the OR opens before that, he can go then. Mac’s drain has been occasionally leaking and that is a risk for infection so they are going to place permanent shunt. There will be a little tube in his brain and a valve that controls the pressure, and then a tube that goes from his brain to his belly where it will empty. Crazy! They are also going to take out the second tumor. Dr O’Neill thinks he’ll get all of it. He estimated that everything would take 4 hours.
Today I asked Dr O’Neill if the pathology from last week was back. He said that yes it was and it was the same. I was confused. The same as in we still don’t know? I guess so. He explained that his large tumor “looked” like a low-grade (that’s better) glioma but that it has a genetic mutation of a high-grade glioma. He said that with all the neurosurgery and neuro-oncolgy experience they have here, they’ve never seen this. He thought maybe it had been written about in a few scholarly articles. Hmmm I did’t realize that was the situation. That means there won’t be a set protocol for treatment. They also don’t know if the second tumor will be the same as the first one they worked on. I’ll be interested to hear his description of it later tonight. Right now I guess we just need to focus on surgery today. We can worry about the lack of a treatment plan later.
This past week of recovery was strange. There were some scary days when Mac was just absent. One morning I walked in from being with Bo overnight and when I came in the door Mac stared at me like I was no one. Poor thing. It’s crazy to me to think how much his body is going through. Every day we were hounding the neurosurgery team saying that he just wasn’t right. Dr O’Neill was gone for the holiday weekend so we were talking with a different doc almost every day. Umm hello you’re not allowed to have a life outside of Mac’s brain tumors! 😉 We couldn’t wait for him to come back on Tuesday. When he returned, he decided to start up the steroids again which Mac was weaned off of on Sunday. I think it’s making a positive difference. He’s definitely more present. He’s more moody and upset but I’ll take it. His walking is rough but he hasn’t really used his legs in a week. We really aren’t in a place to work on rehab yet.
Ok well I’m going to go enjoy some Mac time before surgery. Love you all 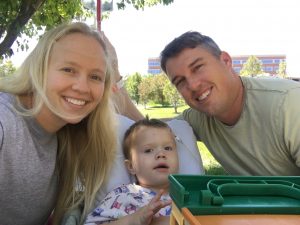